Ok, let me make this very clear, I LOVE BACON! I’m a big breakfast lover and some of my best and earliest memories are of my mom making pancakes and bacon for our morning breakfast on the weekends. Sometimes we had scrambled eggs and bacon, other times fried eggs and bacon, and occasionally French toast and bacon. But almost always bacon was on the menu for breakfasts and I grew up adoring it. The delicious smell of bacon cooking on weekend mornings is one of my favorite childhood memories. Bacon is everything I like: salty, fatty, porky flavor. When I was a child I didn’t know if bacon was good or bad for you, I just knew I loved it. As I grew older, however, I began reading about how bad bacon was for me. It was full of saturated fat, sodium, chemicals that could cause cancer, raise cholesterol, and eventually kill me. That’s heavy stuff and I began to cut back on my bacon eating, though I missed it mightily. After a few miserable years of deprivation I entered what I call my guilty bacon eating phase, I ate bacon but I didn’t admit that I ate it. I was a closet bacon fanatic. My daughters have grown up eating bacon because I love to cook it for my girls too, and they are big bacon fans as well. 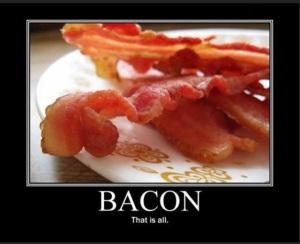 Imagine my surprise after all of the years of no bacon and then secret bacon eating, when I happened upon an article by Kaayla T. Daniel, PhD, CCN, that was featured in Dr. Mercola’s newsletter called, “Save Your Bacon! Sizzling bits about nitrites, dirty little secrets about celery salt, and other aporkalyptic news” January, 2013. She says that there are many studies out there saying that bacon leads to death, particularly a study by the Harvard School of Public Health that leads to the negative perception of bacon. However these studies show a minute increase in the risk of “death by bacon”. A 0.2 % increased risk at most. Dr. Daniel sets out to debunk these dire notions about bacon and says that bacon actually is 50% monounsaturated fat (MUFA!), 10% polyunsaturated fat (PUFA!), and 40%saturated fat. She also says that pork fat contains a form of phosphatidylcholine which contains more antioxidant activity than vitamin E. The fat also contains fat soluble vitamin D, which is good for us.

The most important aspect that makes bacon good for you, though, is the source of the bacon. Factory farmed pigs that are fed mostly grains will be low in vitamin D, but pigs allowed to freely roam and forage outdoors will be high in vitamin D. She also informs us that bacon fat can help diabetics stabilize their blood sugar because of the triglycerides in bacon fat. It’s also believed that bacon can lead to weight loss because a bacon and eggs breakfast is high fat, high protein, and low carb, which can reduce the hungry feeling and rev up the metabolism. Dr. Daniel informs us that though the “food police” warns us about the dangers of cholesterol and sodium, there is no proof that high cholesterol leads to heart disease and also no proof that eating sodium leads to heart disease, cancer and other dire diseases. She warns that eating “nitrite free” bacon isn’t healthier for us than bacon cured with nitrites, because the other methods used to cure the bacon can actually add more nitrites to the bacon than the traditional methods.

So the key to making bacon healthy is to buy bacon that uses traditional curing methods but not from bacon producers who use cheap, fast and unhealthy ways to cure the bacon. How do we know the methods a bacon manufacturer uses are healthy? First of all, supermarket bacon is mass produced using cheap and unhealthy processes so that type of bacon should be avoided. Dr. Daniel suggests contacting an organization called Weston Price, a group that connects people to farmers that are producing healthy food. They have hundreds of chapters throughout the United States, and she recommends contacting a chapter leader to find out the best sources for bacon in each area. I get my bacon at the Farmer’s Market or health food grocery store, and you can ask for information about the curing methods and processing of the bacon. The conclusion to all of this is that now not only do I still love bacon, but I don’t have to hide my love for the pig anymore. That’s progress!